skip to main | skip to sidebar

Tim Tams- We were discussing this lovely treat in the office, as we discuss every thought that ever enters our minds, and I wanted to learn more about it. I love biscuits. Digestives in particular. The Wiki site gives this lovely description: A Tim Tam is composed of two layers of chocolate malted biscuit, separated by a light chocolate cream filling, and coated in a thin layer of textured chocolate. (Yum!) It also follows with some very important information about the coming of age of these treats....The Tim Tam Slam is the practice of biting off the opposing corners of a Tim Tam, and using the modified biscuit as a 'straw' to suck up a hot beverage.

Adding "slam" to pretty much any chocolate covered treat is a surefire way to make me want to try it out. "The Snicker Slam!" Could you even imagine what that would be?!?!
Not sure why, but I also fell in love with the term "modified biscuit." It just made them seem so...important. I want to write it on a bathroom stall somewhere, maybe next to a gang sign or some sexual teen accusation, "Tara's got crabs and herpes...Joey hearts modified biscuits"...Wouldn't really make any sense though...? But graffiti is always very spirited and rebelious and we should return to it every so often...even encourage our kids to spread a little tasteful artwork in public places. It's human nature.

My crotch area is too tight now
(Again...possible bathroom stall? I gotta keep a Sharpie handy).
This little subject line is a spam email that I received at my work address. I could list all the vulgarity I have had to deal with, but this one...it really made me laugh out loud and I never want to forget it. They are really drawing at straws here. I remember back in 07' when spam email was just a list of prescription meds or a rhetorical (yet tasteful) question about your sex life. "Are you performing to her standards?" and "Viagra/Cialis at next to nothing!" But now, we're dealing with some borderline literary molestation. I mean, some of them are so graphic I find myself getting a little squirmy at work...(don't try and hide it, you've been there too). I say, tone down the spam...not because I won't be able to explain the term"hard cock" to my kids outside of barnyard context....but because I would rather indulge in my fantasies at home, in the car, maybe after tagging up a bathroom stall instead of embarassing myself at the office!

Of course, after stumbling upon these opportunities to shit up some stalls with grafitti, I had to research. Found a couple websites dedicated to the practice:
www.thewritingsonthestall.com/ AND www.graffitiproject.com/

Fun sites to frequent...there are countless, clever inspirations written and doodled...In a time where we are looking to define ourselves as a UNITED NATION, it's a treat to see who we all are in the bathroom. Fun find: Some come here to sit and think, some come here to shit and stink, but I come here to itch my balls, and read the writing on the walls.
Posted by Tricky Mayan at 1:58 PM 2 comments: 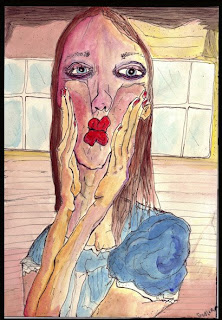 matthewgraygubler.com
Turns out the nerd from Criminal Minds is quite the artist! His drawings are very real...but more like case sketches....if someone were to describe how someone looked (poetically) his drawings would be the result. My favorite is Abe Lincoln...
Homework for Italian class: Research Dino DeLaurentiis and present his life and works to the class in Italiano. Almost too easy.
Posted by Tricky Mayan at 8:26 AM No comments:

Confessions of an EHM

Recently finished up Confessions of an Economic Hit Man by John Perkins. Great book. I found myself using it as Nyquil because political jargon makes me sleepy, but it really did change my life...for about a month...how books do. Poor timing I suppose, with thoughts of farming in the Pyrenees, making soap and living in the hills of Riccia with my family, I don't have the energy to change the world. Maybe when we get back.

Perkins tried several times to publish the book but was bribed and eventually threatened to put a lid on it. The copy that I read was borrowed. Covered in coffee, no sleeve, no title....just a brown, torn up, bound stack of papers which contributed to it's "secrecy." I planned on writing a review, but I found these two excerpts from the book that both define and summarize it entirely. Buying books these days is tough...decisions like "bread...milk...or paperback" are prominent....sooo, honestly, you don't have to go buy the book after checking this out...but I do hope you'll check out JohnPerkins.org (I plan on trying to get to one of his lectures) and reading the prologue next time your in the bookstore...let me know what the cover looks like.

"This is what we EHMs, (Economic Hitmen), do best: we build a global empire. We are an elite group of men and women who utilize international financial organizations to foment conditions that make other nations subservient to the corporatocracy running our biggest corporations, our government and our banks. Like our counterparts in the Mafia, EHMs provide favors. These take the form of loans to develop infrastructure, electric generating plants, highways, ports, airports, or industrial parks. A condition of such loans is that engineering and construction companies from our own country must build all these projects. In essence, most of the money never leaves the United States; it is simply transferred from banking offices in Washington to engineering offices in New York, Houston or San Francisco."

"Despite the fact that the money is returned almost immediately to corporations who are members of the corporatocracy (the creditor), the recipient country is required to pay it all back, principle plus interest. If an EHM is completely successful, the loans are so large that the debtor is forced to default on its payments after a few years. When this happens, then like the Mafia, we demand our own pound of flesh. This often includes one or more of the following: control over United Nations votes, the installation of military bases, or access to precious resources such as oil or the Panama Canal. Of course, the debtor still owes us the money and another country is added to our global empire."

Posted by Tricky Mayan at 9:13 AM No comments:


You walk on the moon float like a balloon
You see it's never too late and it's never too soon
Take it from me what it's like to be...
In Living Color!

-The Overweight Lovah Heavy D
Posted by Tricky Mayan at 12:55 PM No comments:

The violent sting of regret....

I always promised myself I would never regret anything in my life. It all happens for a reason... if you think it's regret, let it linger for a few minutes and you'll see it's just fate with a creepy mask on. Surprise! That was supposed to happen!

Oh...turns out 4 years of your commuter life is down the drain because Lit majors don't make any money...No regrets here. I got to read 800 books from the canon and write some earth shattering thesis statements on Alexander Pope's love letters. Get that dirt off your shoulder and hang up your diploma!

Oh...turns out your bladder is far weaker in your sleep than you'd imagine after an excessive night of drinking...No regrets here, we invested in that mattress cover at Sleepy's so things really worked out...plus it's a great story for the kids.

Nope...never let regret get a hold of me. Until that fateful day. The day I won tickets to see My Morning Jacket...and shamelessly sold them to a girl on Craigslist who was far less into the band than I (clearly exhibited in her lack of SHOUTING in our emails, use of smiley faces, exclamation points and desperation). I felt used. I wanted to light her money on fire.

I have watched Youtube video after YouTube video...and the mask gets creepier and creepier. Ugh, regret....you merciless foe. They covered "All I Need" by Tammy Terrell & Marvin Gaye!! The humanity.

Whatever....Along the same lines (not really)
A couple sad Mondays ago we were set to check out Vampire Weekend at the new Wellmont Theatre in Montclair (which I must say has a wonderful view from the veranda...we were never in the "veranda" I have just always wanted to say something like that). I, with all my greed and spite on a Monday morning, attempted selling the tickets on Craigslist with a plea to readers "I hate Mondays, as they have continued to ruin my life, and can't make it to the show...please buy 2 tix face value." My very first response came an hour later and the conversation read as follows:

Evan: Dude, if you want to cheer up and get out of the shit mood you're in then the best thing you can do for yourself is go see Vampire Weekend. I would offer to buy them but honestly, I think you need them more than me (and i'm broke). Go to the show, man. Don't sell those tickets.

Me: Dude....
thanks....
I'm going. =) **note the smiley face (aforementioned in showing excitement and gratitude)

Me: ...and I plan on writing about you on my rad blogspot (that is read by the world) about how you salvaged my Monday and reassured me that there are fair people in this world that really care about our well-being. ....you are kind and good...and no one will read about it.

Evan: Glad I could help. I logged onto craigslist to find a job and ended up making your day and getting cast as an extra for a matzoh ball soup cooking show demo. The internet is a craaaazy place.... Have fun at the show and let me know if they play any new jams that aren't on the album.

Me: Hahaha!
So strange...Congrats on your matzoh ball gig!
I'll keep you posted and send some video of the show.

K...so the ending gets pretty weird, boring, typical....but the boy stepped in and changed a whole work day for me with a simple response to a Craigslist posting. I would never go out of my way to do that...changed my whole perspective on mankind....and I never sent him any video.
Posted by Tricky Mayan at 5:47 PM 1 comment:

My Whole Life Ahead of Me

Tricky Mayan
I strategically plan my food in portions so that I have just the right amount of mashed potatoes with corn, hot dog with bun, grilled cheese with pickle, etc.....I feel defeated if it doesn't work out in the end. I talk over people, use ellipses.....blush in susceptible situations, wait to talk, hover over toilet seats, give blood, and love animals.